The Biggest Mistakes Competitors Make at a BJJ Tournament

The Biggest Mistakes Competitors Make at a BJJ Tournament 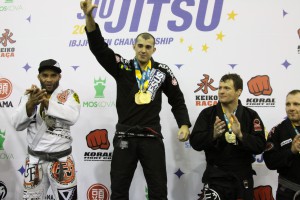 Brazilian jiu jitsu tournaments are physically and mentally demanding. Depending on the tournament, competitors can spend all day sitting around waiting for their division to be up. Not knowing when your division will be called is a nerve-racking experience, leaving you unsure when to warm up and when to eat. Some of the larger tournaments offer competitors more structure ( IBJJF ), with times and schedules assigned a few days before the tournament. But BJJ competitors are still notorious for making some of the same mistakes at every tournament.

For every competitor it is important to enter a tournament fully prepared both mentally and physically. Here are the biggest mistakes I see people (even my own students and friends) make when it comes to competing in a BJJ tournament:

You could have the best game plan in the world, the best techniques, strength, and conditioning, but it will do you no good if you do not make weight. At many tournaments you can find competitors running around before weigh-ins trying to drop the last few pounds. In the larger federation tournaments if you do not make weight you will be disqualified. Knowing that you could be disqualified places extra pressure on the competitor. Before a tournament, the focus should be on your game plan not on making weight.

Many of the larger tournaments during the year take place in different countries and cities. This means traveling for a large number of competitors. It is not uncommon to hear of competitors who missed weight and were no longer allowed to compete. There is no excuse for this. You spent endless hours training. You spent the money, booked a plane ticket, but did not make weight. Your weight cut should be planned out by one specialist (xercisebjj) better than your travel plans.

When deciding what class to compete in start by looking at your current weight. How close are you to the weight class you would like to compete in? Second, look at how far away the competition is. If you are 9kg away and the tournament is in two weeks you might want to consider moving up a weight class. Third, what time are weigh-ins? Are weigh-ins the same day as the tournament or the day before? Will you weigh-in with the gi on or without? Everything matters.

Many competitors suffer unnecessary losses from poorly planned weight cuts. Trying to cut too much weight too fast will do very little for your performance. At some of the larger tournaments, where five or more matches are common, a poorly planned weight cut will leave little left for later matches. For tournaments that allow weigh-ins the day before, I like my competitors to be no more than 4,5 kg above their weight class the week of weigh-ins. For competitors that have a same day weigh-in, they need to be no more than 1,5 kg above the week before. I recommend any competitor that is above my recommendations to move up a weight class.

Mistake #2: Not Warming Up Properly

Competitors can be sitting around a tournament all day, and then are expected to go from zero to hundred at the start of a match. Many of the injuries you see during tournaments are from a lack of warming up. Brazilian jiu jitsu is a contact sport; injuries can happen. Non-contact injuries can be avoided with proper preparation.

During class there is always some type of warm up before the class starts sparring or intense drilling. In 23 years of BJJ I have never been to an academy where the students line up, bow in, and then start sparring at full speed. For some reason competitors do the opposite at tournaments. They sit around all day waiting for their division to be called, then walk onto the mat and compete. Before a competition it is important to not change anything. Warm up properly before your division is up. Since warm up space is limited, it is important to have a warm up routine you can perform in a small area, this will help you to be comfortable, confident and ready for the fight.

The morning before you get to the tournament I recommend foam rolling. Fifteen to twenty minutes foam rolling. If you have access to a jump stretch band, I suggest adding in some mobility work for your hips and shoulders. At the tournament another warm up should be done.

For tournaments that provide a large warm up area, partner drills could be a great warm up.

Mistake #3: Not Recovering Between Matches

Brazilian jiu jitsu tournaments are getting more competitors entering every year, which means competitors are going to have multiple matches. The first few minutes after a match, you need to start focusing on your second match. First, get some fluids in. Water with a little sea salt is great. Another option is coconut water. Do not chug, but slowly sip your water or coconut water. For an added bonus, mix in some branched-chain amino acids. Sipping coconut water with some BCAAs will start the recovery process almost instantly.

Once fluids are being restored, focus on your breath. Slow deep breaths will slow your heart rate down. Bringing fresh clean oxygen into the body will start to buffer the lactic acid out. Lactic acid is a byproduct of anaerobic metabolism. Reducing lactic acid will help with that heavy leg feeling or the feeling of tightness you get in your forearms. Better recovery after your first match will allow you to push again in your second. During some of the later rounds it may come down to who has recovered the best between matches.

Mistake 4: Making Too Many Changes

The last few weeks before and the day of the tournament is not the time to change things. I often get asked what to eat the day before or what to eat the day of the tournament. If a proper training and nutrition plan was used to prepare for the tournament, there is no need to change anything. My answer is eat normally, the same as you do now. Eat the same way you would before a hard practice. If you are used to eating chicken and rice the night before, go for it. If you eat the same thing for breakfast everyday, keep it. Competition can do weird things to people’s bodies. Any change can throw you off. Once the tournament is complete you can start experimenting with different foods.

Time has been spent training and eating right, all for this moment. Your focus is on that moment. All the hard work is done. Do not let a simple mistake you could have avoided get in the way of you competing at your best.