Who is the Best Brazilian Jiu Jitsu Fighter?

Who is the Best Brazilian Jiu Jitsu Fighter? 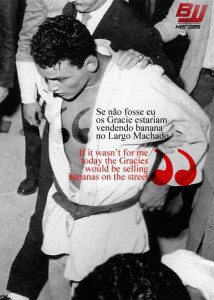 Some people would like know who is the best Brazilian Jiu Jitsu Fighter. This is a really hard question to answer.

Is the best the one who has more titles? If yes, in which years? For many Amaury Bitetti is the best fighter of the 90s. Today how many like Amaury would be able to win? BJJ Heroes made a calculation of some of the best fighters attributing points for the most important Brazilian Jiu Jitsu competitions. In this case BJJ Heroes gave Alexandre Ribeiro the title of best Brazilian Jiu Jitsu Fighter. However today there are more competitions than in the 90s, then how is it possible to make a comparison with fighters from that time?

Is the best fighter the one that presents better results against other martial arts? Some years ago, a MMA fight used to be between two opponents who only knew one Martial Art, sometimes different ones. Who remembers the first UFC when Royce Gracie won against Art Jimmerson who was wearing just one boxing glove, defending his Martial Art. Nowadays in UFC, I believe all fighters are at least Jiu Jitsu Brown Belts and are experts in many other martial arts.

Going back some years we can remember other important names in Brazilian Jiu Jitsu like Wallid Ismail, Zé Mario Sperry and so many others. The list is so big. I understand the fighting style was more aggressive back then, the fighters were always looking for submission, much more than today. Today some champions are able to win by taking advantage of the rules. Would the generation 50/50 be able to win a fight against names like Jacaré?

Well I found the answer myself. I found out who is the Best Brazilian Jiu Jitsu Fighter in my academy. I found not just one. I found many of them. First of all it is the person who was able to teach me. Yes, I’m not a smarter student, I’m a hard trainer but I need a good teacher to pass me his knowledge, experience and ability to fight. It is that colleague who fights with me using 100% of his strength to help me prepare for the competitions. The best Brazilian Jiu Jitsu fighter is who screams motivational words when I am competing, who helps me to recover and go back to the mat. For me the best Brazilian Jiu Jitsu fighter is the friend who fights with me even when he is tired.

My list of fighters has many names and I will write the names and the qualifications of all of them. It is not strange to me to say who are the best fighters in the world. A troupe of guys who train early in the morning, weekends and even on holidays. Those guys/girls who train really hard and know how to give excuses to their girlfriends/boyfriends because the training finished later.

These guys are the best.