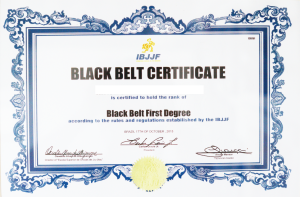 In English history a man of valor and dignity who excelled in the arts of combat and social amenities was rewarded with the title of Knighthood. A designation which let it be known to all that he was a man not only of honor, but also of great fighting ability. This was true in Japan where the same type of men were called Samurai. In neither country was the man nor his rank to be taken lightly. For the prowess and title of each commanded respect! At this time both of these countries consisted of feudal states in which men, like the knights and samurai, were a necessary product of the social conditions in which the lived. A situation which does not exist today. Yet the desire for a man to excel in a martial art, for discipline and self-defense, still exists.

Today a man strives initially in the martial arts to become a “Black Belt”to learn to fight or for the sport. But as his training progresses he should become aware of a stronger calling, the molding of himself into a better person, not only in fighting ability but also in dignity and honor. This has traditionally been the goal of the martial arts student. The black belt is an award or honor given to the modern knight or samurai who has sacrificed many hours in disciplining and honing his body and mind to achieve the epitome of physical and mental attainment. The black belt is the symbol of an expert.

Originally, the ranking system was established to provide a series of levels by which students could measure their progress. The first name of a black belt awarded was known as a “Sho-dan”.

This means the student has mastered the basics of the art and is now ready for a more advanced form of training. The student who continues training will now receive “Dan” ranks or degrees of black belt as he progresses. This ranking system has worked very well in motivation the student, but it also has developed some problems.

“The black belt is where the true journey commences. The belts before that was the preparation and understanding of that journey.”

First, there is a disparity of standards. A proper ranking system should remain universally constant; just as on a ruler one inch is always equal to one inch, so should the standard of rank be equal. However, it must be remembered that the ranking in the martial arts consists of testing human reaction and because of the individuality of each person it is difficult to declare a definite set of standards. Yet this is what must be done if the rank of black belt is to have meaning. Judo, Brazilian Jiu Jitsu have one international standard of testing which prevails through the world. This is due in part to both of them having their origin in Japan where the rules of rank grew with the art. But with karate there were many different schools with each having it¡¦s own set of standards when it came to testing. So when Brazilian Jiu Jitsu was propagated internationally the various countries embraced each style and each set of standards. This made possible a situation in which unscrupulous individuals were able to set up their own organization in which they handed out black belts to many unqualified student s who in return decided to set up their own schools and hand out their black belts. Many of these same people also decided to promotes themselves for financial gain. The end result is that many black belts are a disgrace to not only themselves but to the art of Judo and Brazilian Jiu Jitsu.

Someone once commented that just as there are international money exchange counters to re-evaluate foreign money, there will have to be black belt re-evaluation centers also. To this another added, that if these ever came about, the exchange list would be as thick as a telephone book.

Since the public is not aware of the differences in ranking and the ability of a true black belt they are easily lured into clubs which will award a black belt to students after only a short period of training. This is not only dangerous to the student but degrades the quality of all. The public should be wary of those clubs which use the word black belt as a come on to cheat people out of their money. In a reputable club a black belt can be earned in Eight to Twelve years of hard work and only under competent instruction.

It is also the responsibility for those of us in Brazilian Jiu Jitsu to educate the public as to the significance of the BJJ black belt. Likewise each Jitsuka must realize that the black belt is not a gift, but a goal, a symbol of one’s great effort, determination and motivation. In setting up a high quality ranking system, not only the student but BJJ in general will benefit. Thus instilling a greater sense of pride and achievement in the receiving of a black belt.

The knights and samurai of old allowed nothing to tarnish their honor. Should the Sensei and black belts of today desire anything less?

*After posting this some people asked us about the nature of this article and what we edited.*

*GP edited: Replaced Karate by Judo and BJJ to stay on topic with our MA. To apply it to our community. Which is essentially the same thing as we believe in the same hard work, discipline and samurai warrior mentality. To be a true Martial Artist and not hungry to feed the ego. The article as a whole remained intact*