Pound for Pound MMA Team Triumphs during Aggrelin 7 in Munich 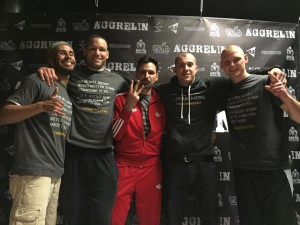 Whilst crossing the Rubicon Julius Caesar is supposed to have said: alea iacta est or ‘the die is cast’. Which is another way of saying that once the first step has been taken into a certain direction, you have to wait and see what happens next. The same was true for three MMA fighters from Pound for Pound coached and trained by Sergio Zimmermann Canudo and Andreas Selak: Filip Bradaric, Alexander Poppeck and Maicon Silva. Their dices were cast during a MMA Cage fight tournament called Aggrelin 7 in Backstage the 12th of April 2015 in Munich. There were, in various weight classes, ten fights in total: each fight had three rounds lasting for five minutes.

For me it was the first time that I ever witnessed such an event in real life. We have probably all seen some UFC fights on TV or the internet, but just standing there almost touching the cage itself is something completely different. It is hard to express in words how excited I was. Especially because I would support and cheer for three guys from my own team, people you know, people you talk to and people you roll with. The atmosphere in Backstage was tantalizing the senses. You could feel the excitement all around you. Many a person was impatiently waiting for the fights to begin. It began all right: a blue light was shining in one corner of the cage and signaled the arrival of one of the two fighters. Accompanied by invigorating music the fighter was checked by the referee and made his way into the cage. Then, a red light shone, shining onto the other corner where the second fighter, also backed up by music, made his appearance. Next, the referee shouted: “let’s go!” and the fight began – the die had been cast.

For Pound for Pound it started with fight number three when Filip Bradaric faced Veselin Dimitrov from the Kampfsportschule Allerborn (up to 89kg). Dimitrov started assertively, which Bradaric countered by keeping him on a distance utilizing his advantage, namely being taller than his opponent. The audience watched carefully every movement the two fighters made. Waiting for that ‘killer blow’ or takedown which would lead to either a knockout or a submission. Dimitrov obliged first and shoot out to Bradaric’s legs for a takedown. Bradaric responded well by ending up in side-control and climbing his way up to a mounted position. The rest was history: in already the first round through a technical knockout / ground and pound (TKO/GnP) Bradaric became victorious! 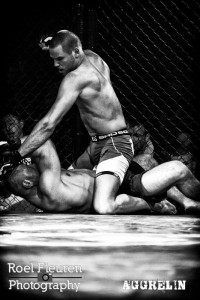 During the sixth fight, Alexander Poppeck entered the cage having as his opponent Johannes Baier from Kaiser Gym Tirol (up to 77kg). It seemed that both started gauging one another by exchanging some preliminary punches and kicks. By doing so, Poppeck spotted at one point the right moment and successfully seized it. He slammed Baier through a takedown on the floor. A bang, that sounded as if the earth was shaking on its foundations. A sensation that is not easily experienced by watching fights on TV only. After the takedown Poppeck worked his way up to a solid and sound mount and, like Brdaric, won in the first round via a technical knockout / ground and pound. 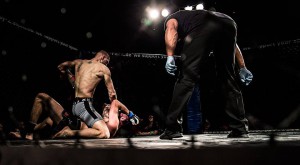 Last but certainly not least was fight number eight featuring Maicon Silva versus Ibo Keskin from Kampfsportschule Dornbirn (up to 68kg). According to Aggrelin, this duel definitely earned the title ‘best fight of the evening’. It was a fight permeated with hard blows and kicks from both sides. Then Keskin seemed to have the upper hand, only to loose it to Silva and vice versa. Keskin executed many takedowns, but failed to get the full potential out of it. In the second round, however, Keskin finally applied a successful one and Silva appeared to be in trouble. Yet, Silva found a way to turn the tides and managed to trap Keskin in a triangle. One so solid that Keskin could not help himself and had to tap thereby losing the fight by submission! Which is an illustration of Silva’s prowess on the ground. Apart from the fact that both fighters were determined to win and gave it all they had, that did not refrain them from remaining respectful and sportive to each other. A quality, that distinguishes between those who know how to throw some punches and kicks and those who are true fighters.

Bradaric, Poppeck and Silva have definitely proven to be just that: true fighters. Practice, preparation, endless repetition and the right state of mind will lead you there. Their dices had been cast and for all three of them it resulted in veni vidi vici. The Pound for Pound Team is truly proud and congratulates our champions!